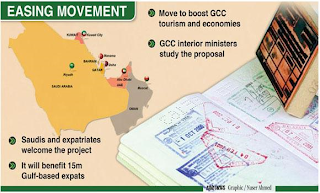 ﻿
GCC countries are planning to launch a European-style Schengen visa by mid-2014 to allow Gulf-based expats and foreign businessmen to move easily across the borders of the six-member bloc.
The GCC interior ministers are working on the details of the project, which many believe will boost tourism and trade in the region, and cut out lengthy bureaucratic delays, said Abdul Rahim Hassan Al-Naqi, secretary-general of the GCC Chambers of Commerce and Industry.

“The Gulf countries are currently working on the technical details of the project, especially an automated system that will link the member countries.”

Abdul Rahman Al-Zamil, president of the Riyadh Chamber of Commerce and Industry, called it a positive development. “The move is significant keeping in mind the growing number of foreigners visiting the Gulf states for business and tourism.”

He urged GCC officials to speed up the project, and said the single visa would facilitate the movement of about 15 million foreign workers working in the Gulf countries, including Saudi Arabia.
Expatriates living and working in the GCC represent 31 percent of the Gulf population. Saudi Arabia, which has the most foreign workers despite stringent visa regulations, is home to about 9 million foreigners.
Asked about the benefits of the single visa, Al-Zamil said: “The introduction of the visa will have impressive benefits for the Gulf economy and will boost the income of citizens, mainly in the tourism sector.”
Shahir A. Hamid, a local travel agent, welcomed the move. “In fact, anyone who has traveled regularly within the GCC will have their own horror stories about the length of time they were forced to wait at passport control.”
The Gulf states do need to have an electronic link between the member countries to exchange data and therefore ease the implementation of the common Gulf tourism visa, he said. “I have heard that the GCC visa could be issued soon. It will not replace the member states’ individual visas.”

The GCC single visa will be modeled on the Schengen visa. It should be noted that citizens of the 26 EU Schengen countries and the US, UK, Japan, S. Korea and Malaysia do not require visas to enter the UAE, Qatar, Oman and Bahrain. However, Saudi Arabia and Kuwait still require most nationalities to apply for visas. Those barred from a GCC country for legal reasons or those who have already been deported would not be considered for the unified visa.link
Posted by Crazy in Kuwait