On our way to lunch today I stopped by the P2BK exhibit in Mishref and saw this HUGE sand sculpture being worked on. If you thought the exhibit last year was cool this one is going to outdo that one by a mile, the area is off to the left of the exhibition area this time and it is giant. The event this year is going to be better than the last couple of years.﻿ 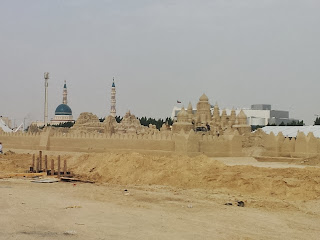 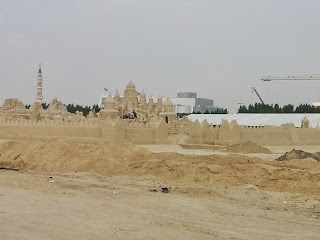 I saw an American guy in McDonald's and we struck up a conversation as I figured he was one of the people working on the sand city. It was his first time in Kuwait and I asked him about his thoughts on Kuwait, he told me it was dirty and things were slow compared to the states. I told him there really isn't a time frame in Kuwait, things get done when they get done.

The crew is staying Fintas and have one day off but they haven't been anywhere in Kuwait. I would have thought that the event organizers would at least show them some courtesy by taking them around Kuwait so they would leave with a better impression about the place and might want to return to visit again some day. Hey P2BK organizers did you ever think of taking the staff out to the museums or showing them around?????

The P2BK event is supposed to be held in January and last for 3 months with many different events being held, I guess they are trying to build up tourism with this.
Posted by Crazy in Kuwait