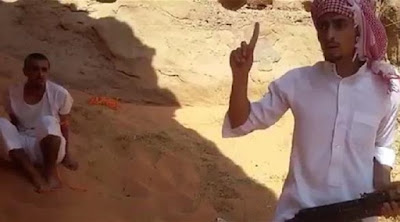 One Saudi soldier and one suspected Daesh militant were killed in a gun battle in northern Saudi Arabia between security forces and two brothers wanted in connection with several attacks last week, the Interior Ministry said on Saturday.

Daesh has called on supporters to carry out attacks in Saudi Arabia and string of deadly attacks by its followers has fuelled concerns about a growing threat of militancy in the world's top oil exporter.

The two brothers were suspects in shootings that killed two civilians outside a police station and a soldier in separate incidents on Thursday.

They were also wanted for allegedly killing their cousin, a member of the Saudi security forces.

Abdul Aziz Al Anzi, 18, was killed, while his brother Saad, 21, was wounded and captured in the shoot-out in the northern desert province of Ha'il, the Interior Ministry said.

Saudi authorities say they are cracking down on the militants and announced in July that it had detained 431 people suspected of belonging to the organisation.

----Not too many things bother me but seeing the guy murder his cousin as he begged for his life brought me to tears, may he rest in peace and I hope they make the surviving brother suffer.
Posted by Crazy in Kuwait