The popular car of contractors is the 94-96 SS Impala. I was the first female to buy one way back in 2005, the early days of contracting. Unfortunately I got one of the worst ones in Kuwait. At that time I paid around 900 KD for it, which seemed ok. I got it off some Pakistani guy who has a shop in Fahaheel. I think he still sells them. Well everything looked fine until I had it a few days.

Little by little it started falling apart. I replaced the axle for around 300 KD. I'm sure I got ripped off, first I'm American and second I'm female. Then it started to overheat, time to replace the radiator. The last thing was replacing the brakes and re-surfacing the rotors. Not a big deal right? Wrong, I went to the "Impala expert" of Fahaheel. This guy is referred by everyone I know. So his henchmen fixed the brakes or so I thought.

The next day driving from the base I hit the brakes hard and the whole front end shook so hard that the steering wheel jerked out of my hands. That was so scary. I thought it was some fluke and kept on going. Once again while coming up to a speed bump the same thing happened. I realized that the guys who fixed the brakes really screwed something up. I took the car back to those guys and they started rambling in their Indian Arabic. I took the guy for a ride and he kept denying the problem.

He told my friend that I drive too fast, that was the problem. Really? I think not, I think the problem is bad work and they don't know what they're doing and charging outrageous prices. I told them I would call Beladiya on them if they didn't fix it. Beladiya is the word you use when someone gives you bad services. The beladiya regulates all shops and stores making sure they have licenses. Remember to use that word when arguing with someone.

Anyways after several fights I gave up and bought another car. After sinking over 1000KD extra into the car and it not working I gave up. The system in the car was worth more than the car itself. But we learn from experience right? Shuwaikh is a better place to take cars. In reality there aren't any good places and the guys are waiting to rip of expats. So beware of the so called professional Impala people. 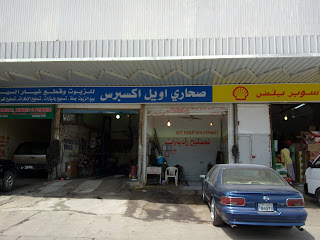 Anyone else have a bad experience with these guys?
Posted by Crazy in Kuwait