Oh no! What will the bedoos drive now if they discontinue the Crown Victoria and Grand Marquis? 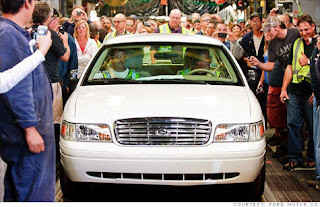 The last Ford Crown Victoria rolled off a Canadian assembly line Thursday, marking the end of the big, heavy Ford cars that have been popular with taxi fleets and police departments for decades.

Demand for better fuel economy and performance has choked off sales over the years. The Crown Victoria and Town Car get just 24 miles per gallon on the highway, a figure matched by some large three-row SUVs today.

Maybe they will still have a small plant somewhere making the cars for the Middle East. Maybe I should buy one now and sell it later at a higher price. Hmm.....
Posted by Crazy in Kuwait