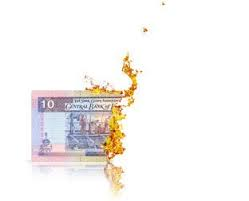 
KUWAIT CITY, Dec 31, (AFP): Kuwait’s provisional budget surplus shrank 15 percent in the first six months of the current fiscal year mainly due to a sharp jump in expenditures, the finance ministry said Tuesday. The OPEC member posted a preliminary budget windfall of KD 10.7 billion ($37.8 billion; 27.5 billion euros) in the period ending Sept 30, compared to KD 12.6 billion in the corresponding period last year, according to figures posted on the ministry website. Kuwait’s fiscal year runs from April 1 to March 31. The main reason for the sharp drop in surplus is a 50 percent jump in spending to KD 5.1 billion by the end of September from 3.4 billion a year ago, the official data showed.

Revenues remained almost unchanged at KD 15.8 billion compared to KD 16.0 billion a year ago. Oil income, which makes up around 95 percent of total revenues, dropped slightly from KD 15.4 billion in the 2012-2013 fiscal year to KD 15.0 billion in the current year. Over the past seven years, projects in the Gulf state have been impeded by continued political disputes between the ruling family-controlled government and opposition MPs despite an unprecedented oil windfall due to high prices. But the government has awarded a number of megaprojects in the past several months, including a power and water desalination plant and a 36-km (22-mile) causeway, each costing $2.6 billion. The government is also in the process of awarding a number of oil projects estimated to cost around $30 billion.

Kuwait is projecting spending in the current fiscal year, which ends on March 31, at KD 21.0 billion, with revenues at KD 18.1 billion, leaving a deficit of KD 2.9 billion. In the previous 2012/2013 fiscal year, the country posted an actual surplus of KD 12.7 billion. Revenues came in at a record KD 32.0 billion and spending was KD 19.3 billion. Kuwait posted a record surplus of KD 13.2 billion in the 2011/2012 fiscal year. The country has ended the last 14 fiscal years in the black, accumulating more than $300 billion in surpluses. Thanks to higher than expected income driven by firm oil prices, Kuwait decided for the second year in a row to transfer 25 percent of revenues into the country’s sovereign wealth fund, the assets of which are currently estimated at over $400 billion. Kuwait has a native population of 1.2 million in addition to 2.7 million foreigners and pumps about 3.0 million barrels of oil per day.link

Here's an idea, why don't the oil companies take away all the Prados and Chrysler cars they give to their employees, no more free gas and no more bogus trips to Dubai for "training." The employees who get cars and gas make upwards of 3500 KD, I think they can afford to pay for gas! There are so many projects that could have been done with the money spent for the fireworks and the 1 million KD spent on this years P2BK sand sculpture.
﻿
Posted by Crazy in Kuwait