Islam-inspired comic superheroes head to US 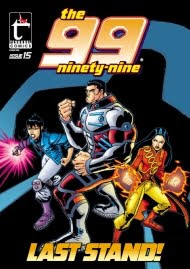 Even US President Barack Obama took notice of them. Now, New Yorkers may do, too, as the Arab world’s first superheroes make their screen debut at the New York Film Festival.

Naif Al-Mutawa yesterday presented “THE 99,” his series starring supernatural characters. His creations have also appeared as comics, alongside Superman, Batman and Wonder Woman. They are based on the 99 attributes of Allah mentioned in the Koran, such as wisdom, generosity and tolerance.

Batina, which stands for the Hidden, is a Burqa-wearing character from Yemen, while Hazel-eyed Widad, or the Loving, has long lustrous brown hair and originates from the Philippines. The giant Jabbar, or the Powerful, is a native of Saudi Arabia and resembles the Hulk. His sneeze can bring down a house and his touch can shatter a brick. These are some of Al-Mutawa’s heroes on a mission to conquer evil.

http://www.the99.org/
Posted by Crazy in Kuwait