Kuwaiti father murders his daughter in 'honor killing' in UK 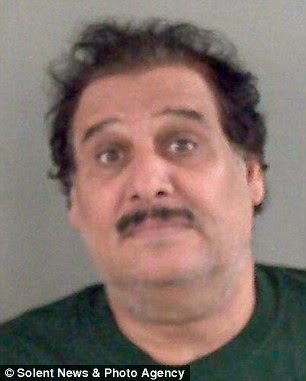 A Kuwaiti father who brought his daughter to the UK to learn English murdered her in an 'honour killing' when he found her using a mobile phone.
Faleh Ghazi Albasman, 59, stabbed 24-year-old Mashael in the neck 13 times in the flat that they shared in Bournemouth, before picking up another blade and wounding himself in the stomach.
After being taken to hospital, Albasman spoke Arabic to a surgeon, asking him what the penalty for honour killings were in Britain, before telling him: 'it's all about the honour'.
Albasman confessed that he was 'boiling with anger' when he attacked his daughter, saying she had been 'disrespectful' to him and told him 'to go home', Winchester Crown Court heard.
The final straw came when he found her talking on a mobile phone, saying that her behaviour had become ‘inappropriate in my culture’.
The court heard Albasman had come over to Bournemouth, Dorset, with Mashael in November 2013 to be her 'chaperone'.She had started an English language course in the seaside town, just before she was found dead by paramedics on March 30 this year

Kerry Maylin, prosecuting, said: 'Mashael Albasman was killed due to multiple stab wounds, 13 in all, mainly concentrated on the neck. The stab wounds were likely to have been inflicted by Mr Albasman standing behind her. He was arrested on suspicion of murder and taken to Southampton General Hospital due to his own injuries. He was seen by medical staff including Mr Ahmed, a consultant surgeon who spoke Arabic. Mr Ahmed told Mr Albasman that he would translate what he was told to the police and Mr Albasman said he understood and at one point told the surgeon "I have finished her".

When asked who the "her" was, he said his daughter, Mashael. He asked Mr Ahmed a number of times "what’s the law here in context to murder for honour?" 'He repeated on a number of occasions "tell them it’s honour, it’s about honour". 'He maintained in his final interview that Mashael had been very disrespectful, she had been talking on her phone and he maintained that was inappropriate in his culture. He said "I was so angry. Boiling with anger. She said to me go back. A girl should not treat good men like me, decent men in this way".


'I hated Mashael, how dare she talk to me in that way. I was so angry, upset and mentally low. Mashael broke my heart. He agreed by killing her had preserved his honour.' Dr El-Khayad, a forensic psychiatrist, gave evidence today and said Albasman was involved road traffic accident which happened when he was in his 20s, leaving him in a coma with a ‘significant impairment of his IQ’. Glenn Harris, defending, said: 'The defendant understands that he has committed a serious offence and he understands by pleading guilty he accepts causing his daughter’s death. This was a tragic incident.'
Judge Nigel Teare did not give Albasman a custodial sentence, but instead sentenced him to an indefinite hospital order.He said: 'You have pleaded guilty to the manslaughter of your daughter, Mashael Albasman.'Police were called to the property, you opened the door and your daughter was found with 13 stab wounds in her neck.'She was declared deceased by a paramedic. Your guilty plea of manslaughter has been accepted by the prosecution.
Psychiatrists who have examined you have concluded that you were suffering from a medical condition called paranoid psychosis.This was possibly caused by a Road Traffic Accident when you were in your 20s which left you in a coma. You felt she was disrespectful to you and was acting inappropriately.'It is appropriate for you to be detained in a medical hospital for treatment.
'The effect of that order is that you will only be discharged from hospital with the consent of the Secretary of State.There will therefore be a hospital order with a restriction order, unlimited in time.'
Albasman, who was emotionless in the dock, was then marched out flanked by hospital staff and security guards. He will return to a medium security hospital called Ravenswood House.