Dubai adds boats and water crafts to their Fleet 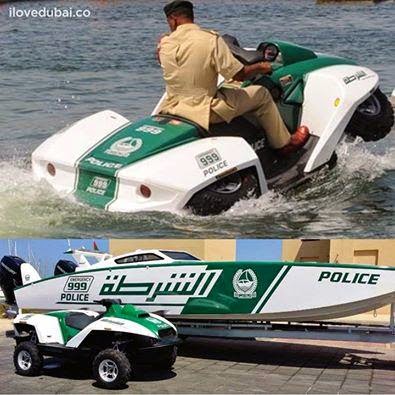 As if outrunning the Dubai police in a sports car was a silly idea, now it appears you can’t escape the emirate’s long arm of the law out on the water either. The latest addition to the police department’s uber-fast fleet? An amphibious Gibbs Quadski.


Weighing in at 1,333 lbs., the versatile Quadski sports a 1300cc four-cylinder engine, good for running down criminals on land and pursuing even craftier ones on water thanks to its 140-horsepower output and 45mph top speed in the wet.


It’s only fitting that the Dubai PD had to up its fleet once again. Just a few days ago the emirate’s medical first responders added a Lotus Evora and two Ford Mustangs to its ambulance fleet, which if were being honest, is still a far cry from the police force’s Bugatti Veyron, 700-horsepower Brabus Mercedes G-Class, McLaren MP4-12C and smattering of other super-lux speed machines.


The Gibbs Quadski will join the Dubai police’s typically high-powered marine fleet, which also includes the green and white speed boat seen above, built by Victory Team earlier this year. Perhaps starting trouble in Dubai would be a poor choice.
Posted by Crazy in Kuwait