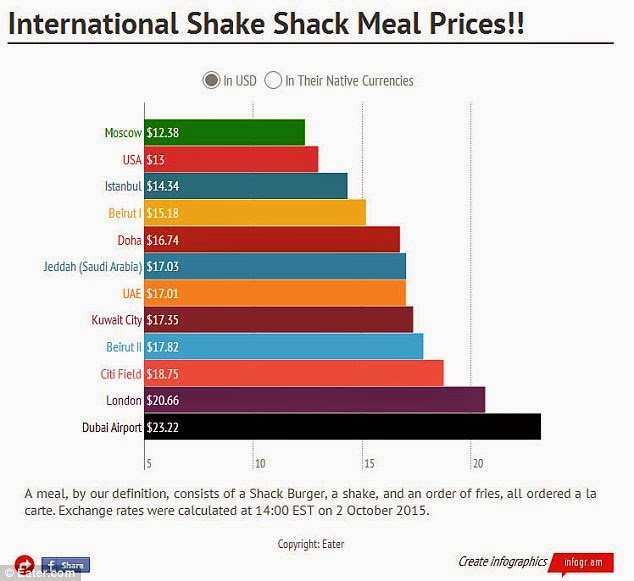 Since its inception in 2000, Shake Shack has earned a reputation as home to some of the tastiest hamburgers in the world.

Now, a new Shake Shack Index created by Eater.com shows just how much hungry diners across the globe are willing to pay in U.S. dollars to get their hands on one of those juicy patties.

The chain's priciest location is Dubai Airport, where diners have to shell out $23.22 for a Shack Burger, a shake and an order of fries.

But the same Shake Shack meal is a steal in Moscow, Russia, where it costs only $12.38 or 495 Russian rubles.The two Moscow locations used to serve Irish and Australian beef, but it is switching to Uruguayan beef to comply with the Russian sanctions regime.
At the flagship location in New York City's Madison Square Park, the Angus beef burger has a price tag of $4.95.  Adding a milkshake and fries brings the to $13. But just a few miles away at Citi Field in Queens, baseball fans have to pay $18.75 to indulge their Shake Shack cravings.


The second most expensive place to buy a Shake Shack meal is in London, which charges $20.66 at its Covent Garden location.
In Beirut, the cost is $17.82,  47 cents more than the cost in Kuwait City. And in Istanbul, it will set you back $14.34.
The very first Shake Shack was founded by famous restaurateur Danny Meyer as part of the redevelopment of Madison Square Garden. It now has 56 locations across the globe.
Posted by Crazy in Kuwait