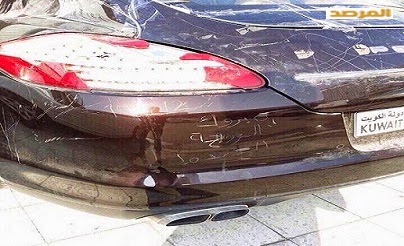 An exasperated Kuwait woman decided to go her own way to greet her husband on his new marriage when she used a knife to scratch all the body of his costly Porsche car.

As if she wanted him to know that she was the well-wisher, she also scratched the Arabic words- ‘congratulations for the new wife’.

Kuwaiti newspapers said the report and picture of the scratched car were circulated on Facebook and other social networks in the oil-rich Gulf emirate.

-I saw this on IG, it was in Arabic so now I know what the problem was.
Posted by Crazy in Kuwait