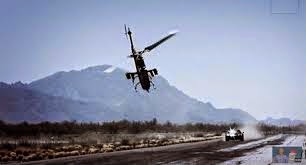 A US Navy helicopter has crashed during a training mission in Kuwait, injuring three crew members, the Bahrain-based Naval Forces Central Command said on Monday.

The MH-60S helicopter went down on Sunday morning during the  training flight at Camp Buehring in Kuwait, it said in a statement cited by AFP.

“All six personnel aboard the helicopter survived the crash and were transported to nearby medical facilities for evaluation. Three of the six crew members sustained minor injuries and received treatment. All have been released,” the navy said.

The crash was not a result of hostile activity and will be investigated, it added.

Kuwait hosts about 15,000 military personnel from the United States, which is leading the international coalition fighting the Islamic State extremist group in Syria and Iraq.

On Wednesday, two Egyptian military officers and two from the UAE were killed when their plane crashed during a joint exercise in Egypt.

Egypt's military spokesman said in a statement a technical failure caused the crash.
Posted by Crazy in Kuwait