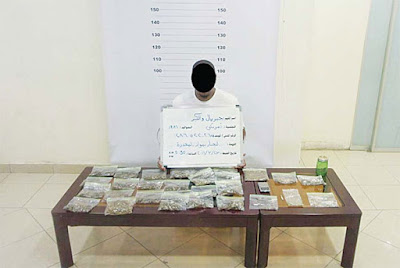 KUWAIT CITY, March 27: The Public Relations and Security Media Department at the Interior Ministry disclosed a team from the Criminal Investigation General Department arrested an American for possessing drugs for personal consumption and trading.

Acting on a tip-off, the security team was tasked to arrest the American who works in a private transportation company and lives in Egaila as he is said to be trading in drugs.

After taking the necessary legal action, the team arrested the accused in his flat during which he was found to be under the influence of drugs. When the team searched the flat, they discovered an undisclosed quantity of marijuana.

During the initial interrogation, the American admitted to possessing drugs and guided the team to the location of other drugs leading to the discovery of 28 medium packets containing one kilogram of drugs. The suspect and the confiscated drugs were handed over to the relevant security department for legal measures.

----Seriously? These ghetto drug dealers are getting out of control. They are giving Americans a bad name which will cause the police to start stopping us as well. If anyone reading this is a dealer stop before you go to jail and you really have no idea what jail is here.

You will be locked up with no appointed lawyer far away from the embassy which will not help you in any case. You will be locked away and no one will know where you are, no contact with family. No comfy jail surroundings like the states either. Be warned!
Posted by Crazy in Kuwait