Commerce Minister of Kuwait fined for parking in handicapped Space 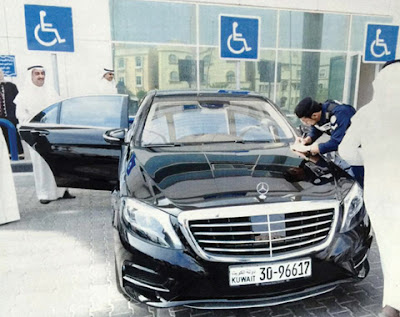 KUWAIT CITY, March 24: Traffic citations were issued to Minister of Commerce and Industry Yusuf Al-Ali and Undersecretary Khaled Al-Shimmali because their cars were parked in spaces allocated for the handicapped in a yet-to-be occupied building in Ishbiliya.

Although both officials denied having knowledge that their drivers parked the cars in those areas, the incident was widely circulated through the social media.

The minister disclosed he was shocked when he came out of the building as he saw traffic officers issuing a citation so he and other officials commended the traffic officers for doing their job.

He attributed the violation to the mistake of the employees assigned in the building as they allegedly instructed the drivers to use the parking spaces for the handicapped.

Meanwhile, Al-Shimmali sent a cable of appreciation to his counterpart in the Interior Ministry Lieutenant General Sulaiman Fahad Al-Fahad, thanking the traffic officers for performing their duties well without taking into consideration the status of the persons involved. He revealed the incident happened when he accompanied the minister to a building near Ishbiliya Cooperative Society.

-----Good Job! No Wasta given this time.
Posted by Crazy in Kuwait