While surfing the web for some volunteering information in Kuwait I came across a website about turtle conservation. I never new Kuwait was into conservation let alone saving turtles. I found this site interesting and thought I would share it with everyone. Here is some information and pics but you can visit their website for more information.

Kuwait hosts two species of nesting turtles on its offshore islands Qaru and Umm Al-Maradim. Green turtles and hawksbill turtles nest on one and the other respectively in different times of the year and their offspring emerge from the nests to reach the Gulf Waters and ensure the circle of life of a very important animal is ensured. Possible presence of the loggerhead and leatherback turtle is being researched. Environmental laws in Kuwait, as in many other countries, prohibit any sort of disturbance of these animals or their hatchlings.

The Kuwait Turtle Conservation Project, launched in June 2008, is a common 3-year effort of TOTAL Foundation, TOTAL Kuwait, The Voluntary Work Center Kuwait and The Scientific Center Kuwait. Its main goals are enhancing awareness and knowledge regarding endangered sea turtles in the country, studying their populations on the offshore islands Kubbar, Qaru and Umm Al-Maradim, studying the state of the marine and coastal areas they are in, conducting environmental information and education, targeting groups of stakeholders and considering possible contribution to the legislative and institutional framework of sea turtles conservation in the country. 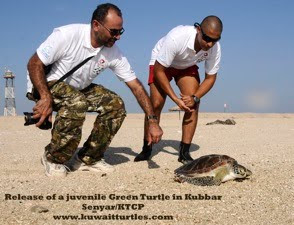 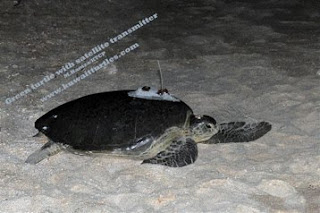 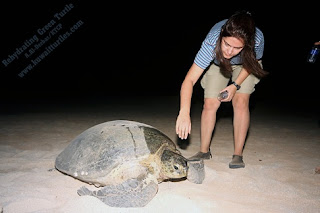 Their website is www.kuwaitturtles.com
Posted by Crazy in Kuwait