The buzz lately around Kuwait is about the 100,000 expats to be pushed out of Kuwait annually. The expats react by asking who will work our jobs and Kuwait cannot survive without them. I read a comment about who will work as taxi drivers, well there are already Kuwaiti taxi drivers who have been doing their job for many years already. When I first came to Kuwait I saw them driving huge station wagons like the ones from the Brady Bunch show.
These days they have their green and white cars waiting outside the terminal for customers. The picture below is of the fleet on the back side of the terminal. From what I've heard they can be a little grouchy sometimes. ﻿ 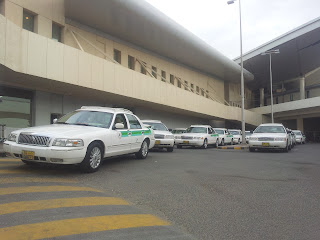 Another important service announcement, there is construction at the airport on lower level so traffic is a bigger nightmare than usual.﻿ 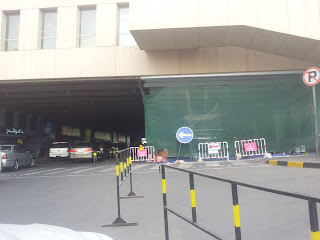 It has been a long time since I went to the airport but I saw they had replaced the sheesha place with a McDonalds. There should be more restaurants to choose from like Dairy Queen, they have that in the Bahraini airport.
Posted by Crazy in Kuwait