UAE tells stores like Lulu to write receipts in Arabic 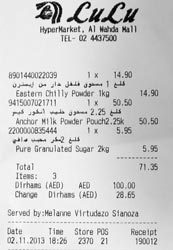 Arabic speaking customers will no longer find difficulty in reading bills issued at key shopping outlets in the country as they started to add that language to their billing service in line with a government decision, newspapers said on Sunday.

Companies operating in the second largest Arab economy have also been told to hire Arabic speaking switchboard employees along with their existing foreign workers to communicate with Arab callers.

The Ministry of Economy said some shopping outlets have already started using Arabic language in sales bills and that a deadline has been set for the end of 2013.

“This decision is mandatory and those who violate it after the end of the deadline could be fined Dh100,000,” said Hashim Al Nuaimi, Director of the Consumer Protection Division at the Ministry of Economy.

Quoted by Emarat Al Youm Arabic language daily, he said the decision affects all supermarkets, hypermarkets co-op societies and all other major shopping outlets as well as car agencies, communications firms, hospitals and other establishments.

He said the Ministry would launch inspection drives after the end of the deadline to ensure compliance with the decision.

Nuaimi said the Ministry took that step after receiving many calls from consumers for forcing shops and other firms to introduce Arabic language in their billing service.

“Those calls were justified by the fact that most outlets use English language in their bills while many of them hire Asians and other foreign workers who speak English with Asian accent with Arabic speaking customers. This could mislead those customers.”

Hashimi said the Ministry would meet representative from those establishments next week to discuss the implementation of the decision.

I will have to take a look at my LuLu receipts, not sure if they write in English and Arabic.
Posted by Crazy in Kuwait