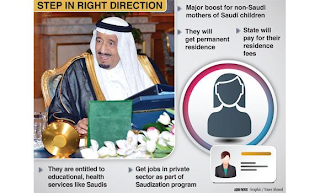 Foreign mothers of Saudi children will be given permanent residence in the Kingdom without sponsors, the Council of Ministers said on Monday. They will also receive educational and health services like other Saudis.

The Cabinet, chaired by Crown Prince Salman, deputy premier and minister of defense, made this important decision upon the recommendation of Foreign Minister Prince Saud Al-Faisal.
The decision was aimed at encouraging non-Saudi wives of Saudis to stay in the Kingdom with their children. The Cabinet said that the state shall bear the woman’s residence fees.

“She shall be allowed to work for others in the private sector and she shall be considered part of Saudization process,” said Culture and Information Minister Abdul Aziz Khoja.(link)

Wow, it's hard to believe KSA would do this for foreign women before any other GCC states. I think it would really help women who might get divorced but still want to be with their children which is hard if their husband didn't get them nationality before they divorced. I'm sure there are a lot of foreign wives who stay in a relationship because there aren't any benefits without nationality and some husbands use the application as leverage such as giving nationality to the woman only if she agrees to give up custody of her children if they end in divorce.
Posted by Crazy in Kuwait