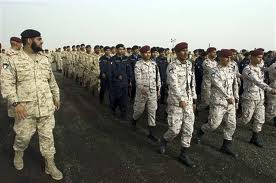 ‘Danger in Iraq a real threat for all neighboring countries’
KUWAIT CITY, July 9: The Islamic Alliance Bloc held its Ramadan Ghabqa on Tuesday, July 8 at the headquarters of the Social Culture Society in the presence of the Parliament Speaker Marzouq Al-Ghanim, former speaker Jassem Al-Kharafi and HH Sheikh Nasser Al-Mohammad. Large number of political figures, members of the diplomatic corps and lawmakers had also attended the event, reports Al- Seyassah daily.

They unanimously agreed that the Arab nations are ignoring the adverse events taking place in Gaza at a time when the Muslims in the Arab world are busy killing each other. They indicated that the danger in Iraq is a real threat for all neighboring countries, affirming that they are against the idea of dividing Iraq because it will not serve any group or sect in Iraq.

They stressed that the Iraqi nation must collaborate to fight terrorism, adding that they hope security and stability will prevail in all Arab countries particularly Iraq and Palestine. MP Ahmad Lari said the demonstrations that were held recently should be conducted within a constitutional and legal framework, adding the parliament is responsible for fixing any defect committed by the government. He stressed that Kuwait needs its people to exert more devoted efforts to serve the good of the nation, adding that both authorities must collaborate to serve citizens.

MP Lari indicated that the parliament discussed several important draft laws including the one on indemnity, adding that many more draft laws will be discussed for improving the standard of living of the citizens and achieving development in the country. He revealed that a budget of KD 23 billion has been approved, adding that he hopes a clearer vision and plan to meet developmental goals will be implemented in the coming years. Meanwhile, regarding the incidents occurring in Gaza, MP Adnan Abdulsamad said the entire Arab region is in a state of turmoil, indicating the fear that the incidents occurring in Iraq may reflect on the entire region including Kuwait. He stressed that the stability of Iraq is essential for achieving stability for the entire region. He said the Zionists’ attack on the innocent people in Palestine reflects the fake promises of peace made by the Zionist entity, adding, “Those who follow the incidents in Iraq will realize that the Zionists’ hands are behind it”. In addition, the Iranian Ambassador to Kuwait Dr Ali Redha Enaity said diwaniyas and social events in Kuwait have special mood of festivity particularly during Ramadan, adding, “We want to congratulate all Kuwaitis on the holy month of Ramadan.”