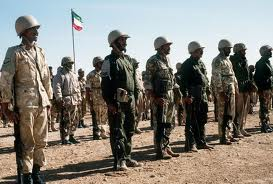 
KUWAIT: The demilitarized zone between Kuwait and Iraq is considered nonexistent in light of the current developments in Iraq, which requires Kuwaiti authorities to deploy military units on the country’s border, a security official said. Kuwait and Iraq are separated by a 217-kmlong demilitarized zone along the border between the two countries, extending 10 km into Iraq and 5 km into Kuwait. Military services in Kuwait already have a plan to replace around 800 border security personnel with military forces when necessary, said the source who spoke to Al- Anba daily on the condition of anonymity.
The source denied meanwhile rumors that Iraqi authorities have withdrawn their forces from the joint border. Meanwhile, the sources warned that thermographic cameras used to monitor the Kuwaiti border have not been subjected to maintenance for a long term, suggesting that many of them are currently out of order.
It's probably a good idea to make sure everyone's passports are valid and have an escape plan just in case because it can all change in an instant. I would also suggest the military dust off their thermo cameras and get serious about the situation as Kuwait is the closest bordering country and it won't take much to over power the border.
Posted by Crazy in Kuwait