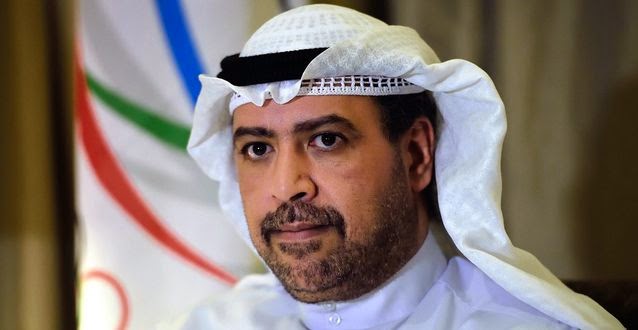 When FIFA president Sepp Blatter addresses delegates at the 26th Asian Football Confederation congress on Thursday at least four men watching him are likely to be imagining themselves standing in his shoes in the future.

Three of them are campaigning now to end Blatter's 17-year-reign as the head of world soccer in next month's presidential elections, but the fourth, biding his time, is increasingly being seen as the man mostly likely to actually succeed him.The three candidates standing for election at the FIFA Congress on May 29 are Prince Ali Bin Al Hussein of Jordan, Michael van Praag, the president of the Dutch FA, and former World Player of the Year Luis Figo of Portugal.

The chances of any of them actually beating Blatter when FIFA's 209 members cast their votes in four weeks time are slim.All three have the backing of UEFA president Michel Platini who decided not to stand last August and may or may not do so at some time in the future.But the man being identified as the one to eventually take Blatter's crown is the highly influential political kingmaker Sheikh Ahmad Al Fahad Al Sabah of Kuwait, who will, almost certainly be elected to FIFA's executive committee on Thursday.

Sheikh Ahmad, known in sporting political circles as "The Sheikh", is a former head of the oil cartel OPEC and is effectively the "go-to" man as the head of the Association of National Committees (ANOC), the Olympic Council of Asia (OCA) and the Solidarity Commission of the International Olympic Committee.Now, with the backing of AFC president Sheikh Salman bin Ebrahim Al Khalifa, Sheikh Ahmad, the honorary president of the Kuwait FA, is set to win one of the three Asian seats on the FIFA executive committee.

He is one of the seven candidates and is likely to succeed along with current incumbents Worawi Makudi of Thailand and Zhang Jilong of China."Sheikh Ahmad is already one of the most important people in world sport, and with the focus switching to Asia with the Qatar World Cup on the horizon, Asia is moving," a close observer of the Asian political scene told Reuters.

"Assuming Sepp Blatter, who is now 79, wins the election in May, he will be 83 in 2019 and not even he can go on for ever. Others might fancy their chances then like Jeffrey Webb, the president of CONCACAF or Platini."But if Sheikh Ahmad is on the FIFA executive committee then, there is a very good chance he will become FIFA president in four years time."

One of the losers in all of this is likely to be Prince Ali.The Jordanian reformer, who has sat on the FIFA executive committee for the last four years as the Asian vice-president, will leave the executive unless he wins the presidential election.His FIFA seat will be taken by AFC president Salman following a realignment of Asia's policies, and he is not standing for election as one of the three Asian FIFA executive committee members.
Posted by Crazy in Kuwait