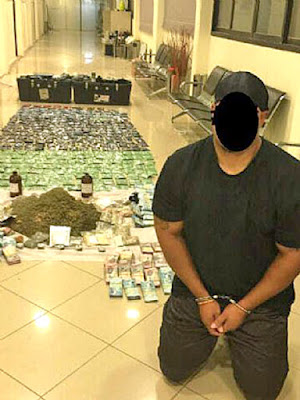 KUWAIT: Criminal detectives arrested an American expat working at Camp Arifjan with 1,400 envelopes of the drug “chemical”, in addition to KD 72,000 he made from sales. He confessed to receiving the drugs by courier at Camp Arifjan. He said he also manufactures the drug at home.

----I guess he should've remembered the quote 'quit while your ahead.' Now he will disappear for years in the central jail before being deported. The central jail is a scary place for criminals who think they are tough. It happened before, an American got caught with a small amount of drugs and disappeared for years before anyone knew what had happened. Good luck bro!

UPDATE: It seems the other American guy who got caught for drugs was the above guy's friend and they work for Honeywell. They were getting their drugs via APO to APO and obviously some more people in the post office are going down soon. He also had a meth lab set up in his apartment selling meth to the crackhead contractors, drug tests coming soon although meth only stays in the system for around 24-48 hours unlike weed which can take 30 days to clear out.

Side note while we are on the subject of illegal items: 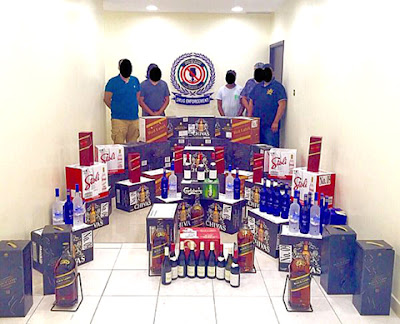 In another development, DCGD busted a network selling imported liquor in Ahmadi, run by a Kuwaiti citizen and four Indians. They had 850 imported liquor bottles. The arrest was made after an undercover agent was sent to buy 10 boxes (120 bottles) of Black Label whiskey for KD 10,000. The Asians used to supply the citizen with the liquor and he sold it.

---That's premium liquor! Check out the huge bottles of Black Label! Someone is going to have a hell of a party in their chalet soon, I mean it will be destroyed by a bulldozer (yeah right).
Posted by Crazy in Kuwait