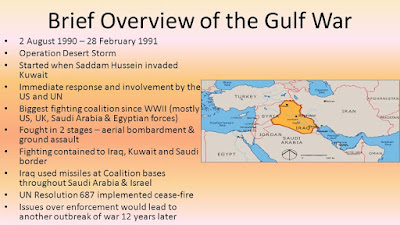 The Invasion of Kuwait, also known as the Iraq–Kuwait War, was a major conflict between Ba'athist Iraq and the Emirate of Kuwait, which resulted in the seven-month-long Iraqi occupation of Kuwait, and subsequently led to direct military intervention by US-led forces in the Gulf War and the setting alight by Iraq of 600 Kuwaiti oil wells.

In 1990 Iraq accused Kuwait of stealing Iraqi petroleum through slant drilling, although some Iraqi sources indicated Saddam Hussein's decision to attack Kuwait was made a few months before the actual invasion. Some feel there were several reasons for the Iraqi move, including Iraq's inability to pay more than US$14 billion that had been borrowed to finance the Iran–Iraq war, and Kuwaiti production of a large amount of petroleum which kept revenues down for Iraq. The invasion started on 2 August 1990, and within two days of intense combat, most of the Kuwait Armed Forces were either overrun by the Iraqi Republican Guard or fell back to neighboring Saudi Arabia and Bahrain. The Emirate of Kuwait was annexed, and Saddam Hussein announced a few days later that it was the 19th province of Iraq. For more photos and information visit this website which contains hundreds of pictures from the war.