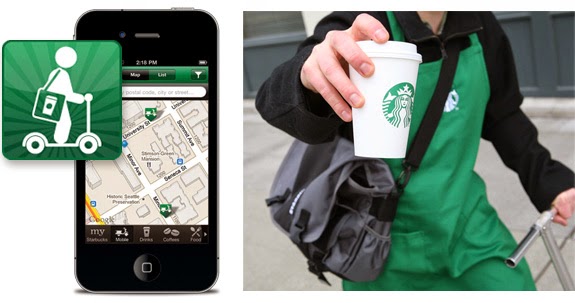 Coffee wherever, whenever you need it? Starbucks is getting ready to make it happen.

On Thursday, Starbucks announced in an earnings call that food and beverage delivery would be available in select markets during the second half of 2015. In a move that CEO Howard Schultz calls "ecommerce on steroids," the delivery service will be an extension of the chain's Mobile Order and Pay app.

Starbucks announced earlier in October that Mobile Order and Pay will be introduced in the Portland area before the end of the year, and roll out nationwide in 2015. The service intends to speed up ordering by allowing customers to place and pay for orders in advance and pick them up at a selected location.

"We have 12 million customers that are highly active on our mobile app, 8 million active unless our loyalty members," Starbucks COO Troy Alstead said in the earnings call. "We are integrating every one of these programs, Card For Life, Mobile Order and Pay and eventually delivery, right into that seamlessly."

Pilots of the delivery service are coming soon, according to Starbucks execs.

Starbucks reported that revenue rose 10 percent in the fourth quarter. While the chain recorded a record $4.18 billion in revenue, it fell short of the estimate of $4.23 billion from Thomson Reuters.

I see they are taking a page out of Kuwait's delivery of everything book. 1000 calorie drink delivered without having to get your fat butt off the couch, that's what I call Kuwaiti style!
Posted by Crazy in Kuwait