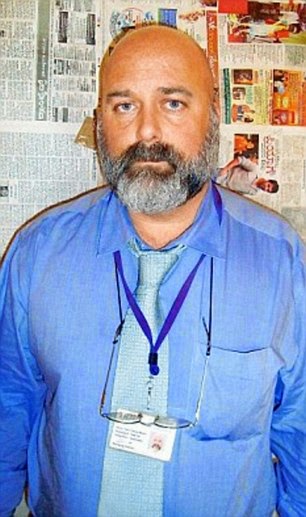 A British teacher who once claimed he taught Daniel Radcliffe has reportedly left India, where police were investigating him over child abuse allegations.
Paul Meekin, 40, was the principal of Trio World School in Bangalore when he was accused of sending lewd messages online to a 13-year-old boy in January 2012.

Now it is claimed he has moved to Kuwait and taken a job teaching social studies at an international school.
The report in the Daily Mirror claims he took the job at an English-Arabic bilingual school a few weeks ago and may have shaved off his beard.
Meekin made widespread headlines in India in 2012 when he was arrested while leading the £1,400-a-year Trio international school, which teaches international GCSEs and A-Levels to English-speaking pupils.
Just three months earlier Meekin had laid on an English high tea and a tour of the school for Ian Felton, the British Deputy High Commissioner in Bangalore.
Meekin was accused of sending lewd messages to a boy online, and police filed charges against him under India's Juvenile Justice Act and Information Technology Act, according to a report at the time by the Mail's India edition Mail Today.
He was later reported to police by his school amid claims he had 'fabricated certificates' related to his academic qualifications when he took the job in 2010. link

If you click on the Daily Mirror link it says he is currently working at Hayat Universal Bilingual School.