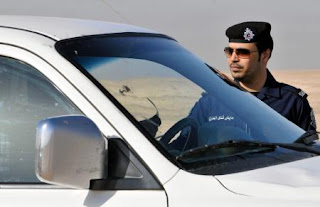 Be Careful! That chick you're checking out might be a police officer taking down your license plate.


KUWAIT: A traffic police unit dressed in civilian clothes has been assigned to detect violations as part of the Interior Ministry’s efforts to enforce the law on the roads around Kuwait. This was reported by Al-Rai yesterday quoting a security insider who indicated that General Director of the Traffic General Department, Major General Abdulfatah Al-Ali, had ‘carefully handpicked’ members of the squad whose job will be to detect traffic violators, note down their cars’ license plate numbers and report their violations. “Maj Gen Al-Ali was helped by traffic directorates in respective governorates, but selected the squad members personally,” said the source who spoke on the condition of anonymity. Meanwhile, the source indicated that the unit began its activity earlier this week and has so far managed to detect “a large number of reckless drivers, especially in Wafra.”
He added that a majority of violations detected were to do with driving on the street kerb and jumping red traffic lights, noting at the same time that the officers took photographs of the violators’ vehicles to serve as evidence.
Traffic department officers have been busy in recent years with crackdowns on violators, during which more than 300 expatriates were reportedly arrested and subsequently deported for repeated serious violations that included driving without a license, jumping the red traffic light and ferrying passengers illegally.
This just opens the door for so much corruption, now anyone can say they are an undercover cop and take your tag number. It's bad enough they write false information on the ticket now they can submit your tag on allegations of a traffic violation.
Posted by Crazy in Kuwait