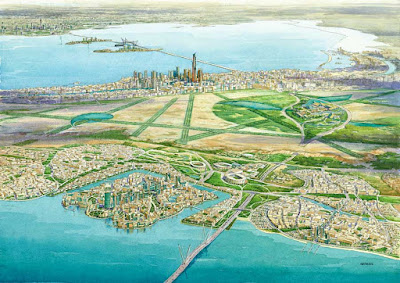 The proposal would help the Gulf state diversify from oil. Kuwait is expected to record its first deficit in nearly two decades this financial year amid lower oil revenues, which account for about 90 percent of GDP.

Al Sabeeh said the “comprehensive and multi-purpose” free trade zones “would act as an economic and cultural gateway for the northern Gulf region and Kuwait, and would support the Kuwaiti economy – thus raising its regional and international competitiveness,” Arab Times reported.“This will aid in limiting the dependency on public funds and in providing job opportunities for young Kuwaitis looking to work outside of the public sector,” the minister added.

The islands being considered are Boubyan, Failaka, Warba, Miskan and Awha, some of which lie close to the shores of Iraq and Iran.

The government is already building a multi-billion dollar container harbour at Boubyan.The islands are also close to Kuwait’s planned Silk City project in Subbiya, Arab Times reported. Work is underway on a 25-kilometre, $2.6 billion causeway linking the capital with Subbiya.

The Supreme Council for Planning and Development has asked the Cabinet to urgently assess the proposal, Al Subeeh said. If approved, the private sector would be asked to finance, execute and operate the free zones.

-----A little late to be trying to promote tourism?
Posted by Crazy in Kuwait