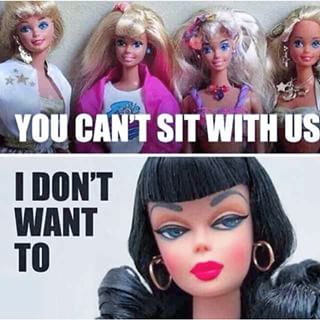 I recently attended an event for bloggers and saw some Kuwaiti female bloggers I follow. In my five years of blogging and attending events I've never really went and talked to any of them except Dudette and she was really sweet. Normally I just blend in with the crowd and nobody notices me which is fine because I like to be on the down low so no one knows who I am. I also think I am looked over because I'm not Arab but I attend the events because of the people who invite me not to mingle.

On this particular night it was a small turn out and I decided to be nice and approach the group of bloggers and introduce myself. The one I initiated contact with was really nice and introduced me to her group, one of them shook my hand and when I told them my blog name they just looked at me with a puzzled stare. Yeah, I figured they wouldn't know who the hell I was because my blog doesn't talk about the newest LV bags etc.

After some pictures were taken a few of them walked away and I approached the remaining female and told her I liked her blog and she was like 'thanks' and kind of walked off to her group which I thought was not cool, but whatever I'm not part of their clique.

I totally felt like the new kid at school and they were like the cool kids who looked at me up and down and walked away. Now I know why I choose to stay silent unless someone talks to me, it's not worth the feeling of not fitting in, live and learn.

If that wasn't bad enough one of the promoters asked me why I only had 650 followers on IG (the other chicks have 30k and more) I told him I am not an Arab and I don't write in Arabic in a country of Arab people. I don't put my face all over IG for attention nor do I find shoes, make-up and expensive purses an important part of my life. When I take a picture I only post it if I think it is worth sharing and honestly it bugs me to have to stop what I'm doing and post stuff to people that really don't care.

How did we survive without internet and social media? Very well, I think. Blogging is a dying trend now that IG is here and there are 'celebrity' IG people who charge huge amounts to show up to an event and for what? Because they show their bodies or brag about what they have? That is what makes a celebrity? I cringe when I see young girls running to these 'celebrities'. Have they been charitable? Did they build a school for the needy? Once upon a time famous people were known for doing something great and now it's for being shallow.

Blogging is no longer important to me, I used to make sure I post something every single day and now, if I find something interesting I will post it if not oh well. If it was my business and my means of living I might give 100% but it's just a dying hobby that caters to an invisible internet world.
Posted by Crazy in Kuwait