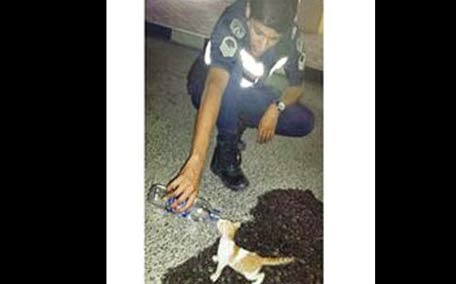 A Kuwaiti sergeant heading a police patrol in the Gulf emirate abruptly stopped off the road and stepped out of his car to give water to a little cat after noticing it was swaying of thirst in the scorching summer heat.
Sergeant Mashari Al Anzi used his own water bottle to give water to the cat, which appeared in a picture to be drinking avidly to quench its thirst on that day when temperatures were close to 50 degrees.
The Arabic language daily Al Watan, which published the picture, described what  Al Anzi did as a “humanitarian gesture required by everyone.”