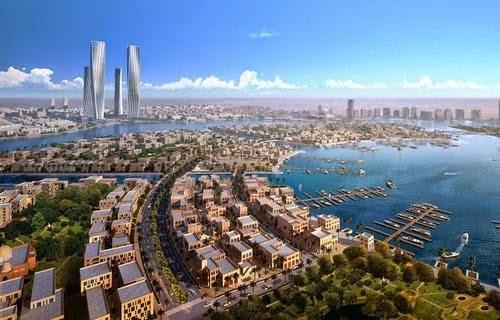 Rather than just build some new stadiums like most host countries, the filthy rich State of Qatar is spending $45 billion to build a whole new city from scratch. Lusail will cover 28 square miles on the desert coast along the Persian Gulf approximately 9 miles from Doha, the country’s largest city.

And it will be a metropolis of the future: Plans include a commercial district, a lagoon, two marinas, a swanky shopping mall, luxury hotels, a hospital, a zoo, golf courses, a snow park, a Six Flags amusement park and more. For getting around town there will be a light rail, underground pedestrian tunnels and water taxis. Everything from transportation to communication will be controlled by command center computers. And yes, people will actually live in Lusail – there will be housing for about 250,000 people


Of course, there will be an environmentally friendly 86,000 seat stadium for the finals of the World Cup. It certainly will be a shiny new toy of a city. But some are worried there will also be a price beyond the billions the government will spend building it. Qatar is notorious for the deplorable treatment and exploitation of its approximately 1.4 million poor migrant workers. At least 1200 have already died working on World Cup projects, and in March, a report from the International Trade Union Confederation estimated that 4000 migrant workers will perish working in Qatar before the World Cup begins.

Six Flags? I thought UAE was bringing Six Flags? I wish someone would bring a great amusement park to this part of the world. Unfortunately UAE has a lot of humidity which means only winter visits to the place. I do wish they would adopt the Mall of America idea which I posted about before. It's an amusement park inside of a mall and not like these cheesy ones we see now, I'm talking real rides and entertainment inside an air conditioned mall. FYI- to those making the new city please include more private schools for expat children, there are only a few and the tuition is double the amount Kuwaiti schools charge.
Posted by Crazy in Kuwait