The weight of love Box 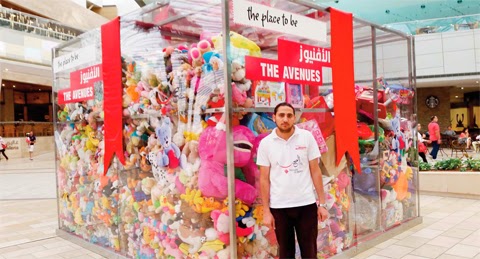 For refugee children living in Jordan or those suffering daily bombings in Gaza, a stuff animal or new toy can offer a small token of the ordinary. It was from this simple aspiration that the Avenues Mall in cooperation with the Kuwait Red Crescent Society launched a ‘Weight of Love’ box campaign where they encourage customers to donate a toy for a child in need during the entire duration of Ramadan.


The Weight of Love Box was set up inside the Avenues Mall at the onset of Ramadan and will be collecting toys until August 15. Customers can donate their gifts in the form of toys, new and old. “The gift will be delivered to children in cancer hospitals throughout Kuwait and the war torn areas of Gaza and Syrian Refugee Camps,” said Omar Muhammad, the attendant in-charge of the special box at the Avenues. “We set this up at the onset of Ramadan to encourage everyone to donate and give something for the cancer stricken patients at Sabah Hospital.
A small gift of toys can ease the pain of suffering patients. These gifts will be delivered to them after Eid,” he said. Khaled, a Kuwaiti, who donated several toys said he gave because it’s the right thing to do especially during the time of giving and sharing during Ramadan and for Eid Al Fitr. “I give because I know this is the right thing to do, this is how we can make kids happy. When I was a kid, if I got a toy it made me happy so I want children to be happy, really the feeling is quite different if you give. It’s priceless,” he said. Khaled donated several new toys as well as some new children’s clothes and sportswear. “If you give, also give something that they can use and enjoy,” he added.
The Avenues urges visitors to give gifts, as they may go to children in need not just the cancer patients but also for the kids in war-torn areas like in Gaza or in the Syrian refugee camps through Kuwait Red Crescent Society. “Your gifts will help us bring joy to children in need and instill in young hearts the values of the Holy Month of Ramadan,” the Avenues campaign suggests.
By Ben Garcia-Kuwait Times
Posted by Crazy in Kuwait