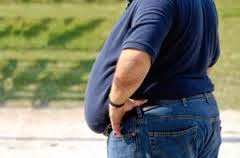 A Kuwait woman divorced her husband because of his big belly, which she says is obstructing him from performing his marital duty.

The woman told court that she had repeatedly asked her husband to follow a diet to bring his weight down but he would not listen.

“The woman told court that her husband cannot perform his martial duties properly because of his big belly,” Al Rai Al-Am daily said.

“She said that she had asked him to divorce her but he refused, prompting her to come to court,” it said, adding that the court granted her a divorce after several sessions.
Posted by Crazy in Kuwait