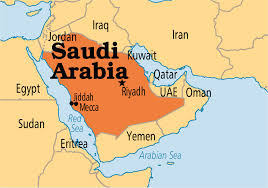 Militants killed two Saudi border guards and their commanding officer on the frontier with Iraq early on Monday, the interior ministry said, in a suicide and gun attack one analyst called Islamic State's first assault on the kingdom.

The boundary, defended by earth barriers and fences and monitored by cameras and radar, has been attacked in the past by mortar bombs fired from a distance, but there have been no ground assaults in recent years.

No group immediately claimed responsibility for the assault, which hit a remote desert area next to Iraq's Anbarprovince where both the Islamic State militant group and Shi'ite Muslim militias close to Riyadh's foe Iran operate.

The use of a suicide bomber pointed to Islamic State, said Mustafa Alani, an Iraqi security analyst with close ties to Saudi Arabia's interior ministry.link
Posted by Crazy in Kuwait