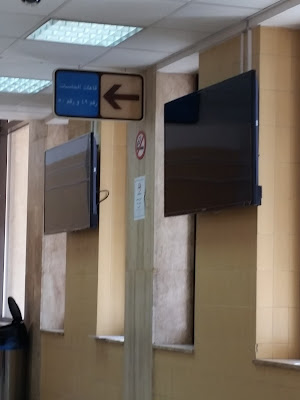 The court in Kuwait city has replaced the sheet of papers containing names and numbers of court attendees with flat screen televisions. Well, they replaced them but they don't work yet, at least they managed to pay for them and get them up on the wall however the people still crowd around the papers that they stick to the wall beside the door.

I watch the large number of Kuwaiti lawyers walk back and fourth only distinguished from the others by the black graduation gown they wear. I also see all of the mandoubs hanging around with their arms full of files who can't enter the room with the judge. Once the court is in session everyone gathers inside the room that is always freezing cold to wait and wait and wait until finally the judge shows up, court should start at 8:30 am but is on hold until the judge finally decides to show up.

I've been to lawyers offices and watched young Kuwaiti lawyers getting all of their advice from the Egyptian guy who works on the cases, so do they actually know the law or they just take the files to the judge for show? Where are the translators in the court and why doesn't the judge make sure no Arab speaking people have one before they even start talking? I eventually found out that there are translators and you have to insist on having one, the judge should then request one and if you're lucky one will show up but it doesn't guarantee that you will understand what's going on as the translators barely speak English. I had one Filipino lady translate and it was horrible, she had a hard time telling me in English what they judge was saying.

Even if the judge speaks English he has to speak in Arabic and everything is recorded in Arabic. There are some outside translators that will come, she was Filipino as well and wanted 9 KD per hour but still didn't translate so I understood. I can't imagine how scary it is for someone who knows no Arabic at all to have to deal with the situation, at least I know enough that I can understand some of it.

So most of the time you are lead into a side room that has the judge and his secretary taking notes by hand which is better as you have privacy. Recently however I had to talk to the judge and his secretary in front of all of the people which was totally nerve wracking and uncomfortable. I had to insist on a translator and once you piss off the judge he will make life hell for you. I hope most people don't have to experience the court and what better way to avoid it by not getting in trouble, not getting married and pray that you will never have to endure the court system.

Another pet peeve, there are no smoking signs everywhere yet they smoke right underneath the sign and throw the butts on the floor, does anyone have any dignity? People wonder why expats don't care about the country, why should they when the citizens set examples, if they throw trash and don't care why should anyone else, right? 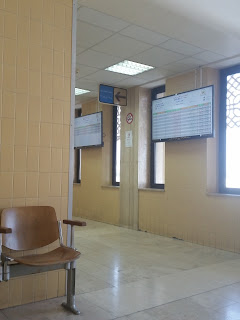 They are online now in the courts and everyone can see the names of the defendant and plaintiffs, I don't think that's cool.
Posted by Crazy in Kuwait