Americans working for GLS getting Deported 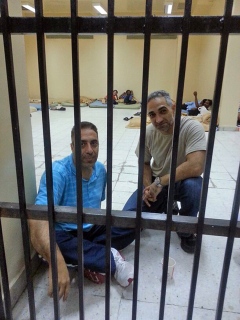 "Arabic linguists Maher Al Masri, left, and Ramzi Zinnekah wait inside a Kuwaiti jail cell in a photo Zinnekah said was taken by a guard. The two men, U.S. civilians employed by defense contractor Global Linguist Solutions, were detained by local authorities in late May and deported to the U.S. as part of a dispute between GLS and the Kuwaiti company it hired to manage its employees. Both are now back at their homes in the States."

A U.S. defense contractor has barred its employees from leaving Army posts in Kuwait after local police issued arrest warrants for the group, a bizarre turn in a monthslong dispute between the company and a Kuwaiti subcontractor.


Nearly 100 American civilians working as Arabic linguists on camps Buehring and Arifjan, two major Army bases in the Middle East, say that since May 31 they’ve been unable to leave either post for medical appointments, personal time or even emergency matters.
All are at risk of being deported by Kuwaiti police, who have no authority inside base gates. The deportation threat stems from a legal dispute between their employer, U.S.-based defense contractor Global Linguist Solutions, and the Kuwaiti company it hired to manage its employees locally.
Before the ban, as many as nine linguists were detained outside the gates, held in Kuwaiti cells and flown back to the U.S., according to linguists interviewed and their employer.
Both the State Department and the Army say they are powerless to move the linguists out of the country or prevent arrests.
“It comes back to us being fugitives,” said one linguist reached at Camp Buehring, who agreed to speak on condition of anonymity. “That’s our status in the state of Kuwait.”
Kuwaiti law requires all foreign workers be placed on the rolls of a local firm, or “sponsor,” which applies for working visas on behalf of employees and manages some aspects of payroll.
The actual employer is required to hire the services of the local firm.

Global Linguist Solutions re-bid its sponsorship contract earlier this year, selecting a new Kuwaiti company instead of the one it previously worked through, Al Shora International General Trading & Contracting company.

GLS and Al Shora dispute what happened next. Al Shora claims linguists canceled their residency under the company. It charges GLS with using Al Shora to remain legal in the country while trying to transfer linguists to the new sponsor.

GLS says it was eager to move employees off Al Shora rolls but was repeatedly rebuffed by Al Shora. The company has accused Al Shora of lashing out after failing to win the new contract.
In March, Al Shora turned over the names of GLS employees to Kuwaiti authorities and declared them absent from work and in violation of their working visas. Curbing immigration violations is a preoccupation in Kuwait, where foreigners account for nearly half the population, many working in the service industry. Full Story

Hubby tells me the Kuwaiti lady won the contract because her sister's husband had wasta, sister got divorced wasta was lost and the sponsor couldn't fix the situation then she found out GLS had put out a bid and a new company won it, which ticked off the old sponsor who then refused to transfer them to the new company and cancelled all of the employees visas and reported them as absconding. Most of them are hiding on base until they can figure out a way to get back home.

This just proves US companies should be careful when dealing with small Kuwaiti companies, there is KRH, DefCon, AC3, MEBS and other big companies that can handle sponsorship a little better but in the end they are all just trying to make a quick buck off the US government. Anyone looking for a sponsor, feel free to ask me about their background.

The Prime Minister of Kuwait is now being questioned and of course the "new sponsor" who won the contract is none other then (drum roll please) KRH!

This sounds like the beginning of a new movie drama, "Not without my Kuwaiti visa", I crack myself up!
Posted by Crazy in Kuwait