Kuwaiti-Americans, Uncle Sam is coming for you! 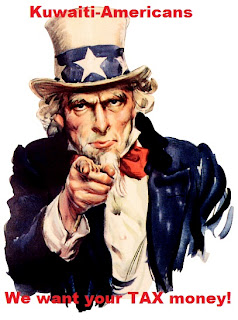 
KUWAIT CITY, June 26: As per United States’ Foreign Account Tax Compliance Act (FATCA), which takes effect early next year, all foreign financial institutes will be required to report directly to the concerned American authorities information about accounts held by US taxpayers or foreign entities in which US tax payers hold a substantial ownership interest, reports Al-Shahed daily.

As a result, US authorities will be given access to the accounts of Kuwaiti citizens who hold American passports to determine their level of income and tax payment. This is an important development in its efforts to improve tax compliance involving foreign financial assets and offshore accounts.

The daily quoting reliable sources revealed that over 20,000 Kuwaiti citizens hold the American passport and they are subjected to observe the new law and pay taxes based on their income, property and salaries they receive here in Kuwait.

Even though the Kuwaiti citizenship law bans citizens from holding the citizenship of other countries, nearly 2 percent of Kuwaitis hold the American passport besides the nationalities of other European countries, sources noted.

Embarrass
They explained that this issue will embarrass the Kuwaiti government and the citizens in question in front of the major countries that require all their citizens to pay taxes, even if they live in Kuwait.

The United States is ready to take legal measures against its citizens who fail to comply with the law and settle payable taxes all over the world, sources added, indicating the banks and exchange companies in Kuwait are uneasy with the declaration of FATCA, as it violates the code of banking and confidentiality- given that the banking institutes are obliged to give the concerned American authorities access to their American clients’ accounts.

They also fear the banks and exchange companies could be hacked when the concerned American authorities get access to the accounts of their citizens, as the system is not covered legally, stressing implementation of the law necessitates the application of series of high quality protective systems, which unfortunately, are unavailable in the majority of Kuwaiti financial establishments.

They noted that the US will impose penalties against establishments that do not comply with the requirement, and 30 percent of their deposits will be deducted.

Sources reiterated the Central Bank of Kuwait and the concerned authorities have been asked to make things easier for the banks that are currently in a vulnerable position of losing their clients or a percentage of their deposits.
United States is trying to collect money from Americans everywhere now! Desperate times call for desperate measures, the US needs all the money it can get to survive.
Posted by Crazy in Kuwait