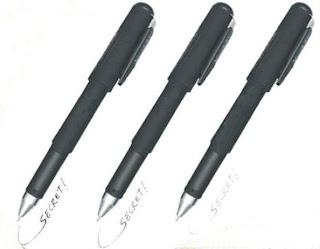 Mystery solved: A Kuwaiti businessman was shocked when a banker informed him that he had forgotten to sign a cheque, reports Al-Rai daily.

The businessman was sure that he had signed the cheque and personally went to the bank to see what was wrong. He indeed saw the cheque was not signed.

However, the mystery was solved by a ballpoint pen he bought from a cooperative society and with which he had signed the cheque.

When he checked the pen which he had bought for 150 fils there was a warning on it which said if the writing was exposed to 60 degrees centigrade, it would disappear.

Without knowing, the businessman had used a pen whose ink disappears.

150 fils, what did he expect!
Posted by Crazy in Kuwait