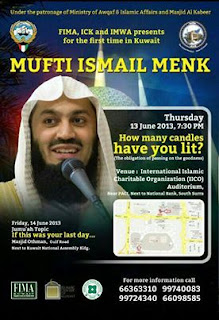 ... Islamic Center of Kuwait (ICK) always strives to provide programs for the benefit of English speaking Muslim community in Kuwait in order to remain steadfast in our Deen and to be successful in this world and in the hereafter.

We are enclosing a flyer of a joint program by ICK with FIMA and IMWA under the patronage of Ministry of Awqaf & Islamic Affairs & Grand Mosque Administration. The main program will be held on 13 June 2013 in International Islamic Charitable Organization Hall (IICO), South Surra (near Civil ID office) immediately after Maghreb prayers. The map of IICO is given in the flyer.

As you know, Mufti Ismail is a powerful and renowned international speaker, Mufti of Zimbabwe and has a large following in the Muslim world, especially among English speaking Muslims.

For the English speaking Muslim community.