Forever 21 prints a reference to one of the most oft quoted passages of the New Testament on the bottom of all of its bags. 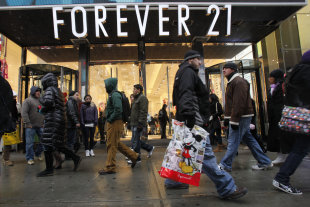 Purchase a skimpy $15 top or $19 skirt from trendy but budget-conscious clothing retailer Forever 21 and you may notice "John 3:16" printed on your shopping bag.

Printed on the bottom of each of the store's bags, the biblical reference is perhaps the most obvious reference to the religious beliefs promoted by the store's owners, the Chang Family, who are born-again Christians.

Mrs. Chang told Bloomberg Businessweek last year that the store had religious roots, citing that "God told her she should open a store and that she would be successful."

The store provoked criticism in the summer of 2011 when it released a slew of religious-themed tees emblazoned with slogans such as "Jesus ♥ You" and "Holy."

Does anyone have a shopping bag from the Kuwait location?

Curves founder Gary Heavin is an outspoken Christian and supporter of conservative and religious causes.

Curves gyms are nationally known for creating a men-free environment where women of all shapes and sizes can work out.

It's lesser known that the company's founder Gary Heavin, is a born-again Christian who has garnered criticism for conservative political views and donating to anti-abortion causes, according to a 2004 Houston Chronicle profile.

Heavin acknowledged there has been some business "fallout" from his views, which prompted some members to cancel memberships.

We have Curves in Kuwait. Hmmm...

For example, Swartz moved to sever the company's ties with a Chinese factory where human rights violations were allegedly occurring despite the fact that it took a hit to the shoe making company's bottom line. Swartz attributed his motivation to his own personal Jewish faith in a 2008 Fast Company profile.

"I can't show you the scripture that relates to the rights of a worker, but I can show you text that insists upon treating others with dignity," he said. "It says in the Hebrew Bible one time that you should love your neighbor as yourself, but it says dozens of times that you shall treat the stranger with dignity." Full Story

A lot of people in Kuwait are sporting Timberland gear. Hmmm......
Posted by Crazy in Kuwait