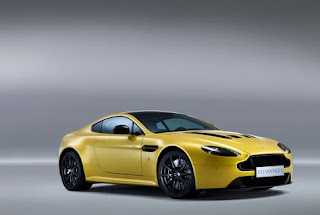 British carmaker Aston Martin, which is part owned by Kuwait's Investment Dar, has announced Gulf car fans can today pre-order its new V12 Vantage S model, which comes with an estimated price tag of $240,000 and is one of the fastest road-going Aston Martins ever built.

With the exception of the limited-run One-77, the new V12 Vantage S is the fastest road-going car ever developed by the offered by the British carmaker, local dealers told Arabian Business.
It replaces the outgoing V12 Vantage and the new AM28 engine generates more power than ever with 573 PS at 6750 rpm.

Its top speed climbs to 330 km/h and with the debut of new seven-speed Sportshift III AMT transaxle and rear wheel drive it is clearly designed and engineered to exploit the full sporting potential of the car. The new model comes equipped with the latest version of Aston Martin's 6.0-litre V12 petrol engine and it develops 565bhp.
It retains the same compact proportions and muscular stance as its predecessor, while features such as the pronounced bonnet vents and flared wheel arches underscore its sporting abilities.

Aston Martin chief executive officer Dr Ulrich Bez said: “It is our most powerful engine in a beautifully tailored suit. It is elegant, yet brutal, and it is at the same time easy to control. It has everything that sums up Aston Martin: power, beauty and soul!”

The new V12 Vantage S has an estimated price point of $240,000 and according to Tim Trenker, general manager of Aston Martin in the UAE, the new V12 Vantage S will be first shown here in the UAE during the Dubai International Motor Show which will take place in November, but orders can be placed as of today.

Britain’s Aston Martin has strong links to the Middle East as majority owner Investment Dar of Kuwait led a group of investors that bought the carmaker from Ford in 2007
Aston Martin said in January this year its new minority private equity shareholder will bring resources that will help the luxury carmaker launch the next generation of sports cars and expand its market presence.

The maker of sports cars, perhaps best known for its classic DB5 sports car from early James Bond spy movies, plans to invest $1bn in new products and technology up to 2018.

Time for people to apply for new loans!
Posted by Crazy in Kuwait