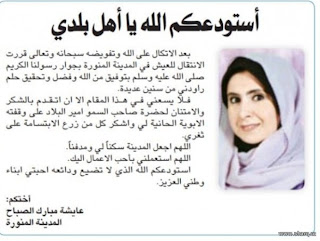 A Kuwaiti princess has dumped her wealth and left her country to live permanently in Saudi Arabia to be close to the tomb of the Prophet Mohammed (Peace Be Upon Him), saying it has been her dream for years, newspapers reported on Tuesday.


Princess Aisha Mubarak Al Sabah, a member of the ruling family in the oil-rich Gulf country, said she was bidding a farewell to the people of Kuwait in a brief statement published in most local newspapers.
She said she was departing Kuwait permanently and settling in the western Saudi town of Medina, where the Prophet’s grave is based.
“After relying on God the Almighty, I decided to leave my country and live in Medina so I will be close to our dear Prophet peace be upon him and to fulfill a dream that has tantalized my head for many years,” she said.
The Princess said she had already sought permission to leave from Kuwait’s Emir Sheikh Sabah Al Ahmed Al Sabah.
“I express my gratitude to the Emir for his support and sympathy and pray to God the Almighty to make Medina my residence to be used for obedience and later my tomb…”
Posted by Crazy in Kuwait