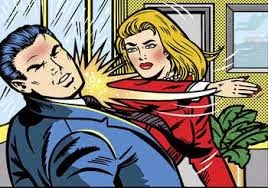 Woman turns on eve-teasers, sends one to hospital

KUWAIT CITY, Sept 1: One of the four youths who was badly kicked by a young woman inside a commercial complex in Al-Rai had to be rushed to a hospital, reports Al-Rai daily. The daily quoting police sources said this happened when four youths were eve-teasing the three women. The youths reportedly followed the women wherever they went until the women to the surprise of shoppers in the area, turned on the youths and started beating them. One of them kicked the youth on his private part and he had to be rushed to a hospital. A case of eve-teasing has been filed against the youths. Six other persons have been referred for further interrogation.

That'll show them!
Posted by Crazy in Kuwait