Swarovski and Samsung work Together 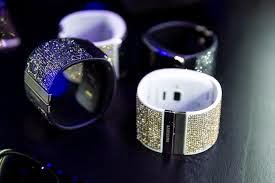 This summer, Samsung and Swarovski formalized an agreement to collaborate on producing special edition accessories for the Korean company's devices. It started with the Galaxy S5 and Gear Fit and, at IFA this week, it continued with a pair of grandiose new limited editions. The new Gear S Tizen smart watch and the Galaxy Note 4 Android phablet will both come with exclusive silver and gold variations that are adorned with densely packed Swarovski crystals. The effect upon the eyes is searing, particularly when set against the Swarovski-encrusted demo area in which Samsung was showing the two devices off.

The Swarovski glitz actually goes nicely with one of Samsung's more ornamental watch faces for the Gear S, though the same can't be said of the Note 4. That already large device is made significantly thicker by the addition of the sparkling crystals, and it doesn't feel particularly friendly to the palm, either. If there's any sense to be made of these opulent modifications, it's when wearing the Gear S as a wide bracelet that just happens to have a 2-inch smart device attached to it.link

I would actually wear that blinged out smart watch.
Posted by Crazy in Kuwait