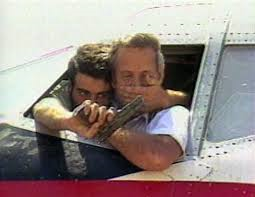 I've been asked if I knew about the hijackings of Kuwait Airways Flight 221 which happened in 1984 and flight 422 in 1988, I had not heard of those so I did some research and found the stories of these two incidents.

On December 3, 1984, a Kuwait Airways flight from Kuwait City to Karachi Pakistan was hijacked by four Lebanese Shi'a hijackers and diverted to Tehran. The hijackers demand was the release of the Kuwait 17, which was not met. During the course of the stand-off women, children and Muslims were released and two American officials from the U.S. Agency for International Development, Charles Hegna and William Stanford, were shot dead and dumped on the tarmac. The few dozen passengers left on board, particularly Americans were threatened and tortured. "Every five minutes there was a frightening incident. There was no letup at all," British flight engineer Neil Beeston told the BBC.Paradoxically the hijackers released a statement claiming "We do not have any enmity toward anyone and we do not intend to deny the freedom of anyone or to frighten anyone..."

On the sixth day of the drama, Iranian security forces stormed the plane and released the remaining hostages. Authorities said they would be brought to trial, but the hijackers were released and allowed to leave the country. Some passengers and officials suggested complicity by Iran in the hijacking and that the hostage rescue had been staged. One Kuwaiti and two Pakistani passengers claimed that the hijackers received additional weapons and equipment once the plane had landed, including handcuffs and nylon ropes used to tie passengers to their seats. One American official wondered if the surrender was not preplanned: "You do not invite cleaners aboard an airplane after you have planted explosives, promised to blow up the plane, and read your last will and testament." The U.S. State Department announced a $250,000 reward for information leading to the arrests of those involved in the hijacking, but made no military response. Later press reports linked Hezbollah's Imad Mughniyah to the hijackings. Wiki link

Flight 422:
Kuwait Airways Flight 422 was a Boeing 747 jumbo jet hijacked en route from Bangkok, Thailand, to Kuwait on April 5, 1988, leading to a hostage crisis that lasted 16 days and encompassed three continents. The hijacking was carried out by several Lebanese guerillas who demanded the release of 17 Shia Muslim prisoners being held by Kuwait for their role in the 1983 Kuwait bombings. During the incident the flight, initially forced to land in Iran, travelled 3,200 miles from Mashhad in northeastern Iran to Cyprus, and finally to Algiers.

Kuwait sent officials to negotiate with the group, but talks were frustrated because they refused to release the prisoners. Two hostages were killed during the course of the siege, before it eventually ended in Algiers on April 20. The hijackers – who were suspected by Kuwait of belonging to the Lebanon-based Hezbollah organization – were given passage out of Algeria. With a duration of 16 days the crisis became one of the world's longest skyjackings. It also inspired an armed siege at a high school in the United States a few days later.

Two passengers, Abdullah Khalidi, 25, and Khalid Ayoub Bandar, 20, both Kuwaitis, were shot dead by the hijackers and dumped on the tarmac in Cyprus, as the hijackers demanded more fuel. Wiki link

Since I've been living in Kuwait I've never heard anything about remembering the two Kuwaitis who died during the hijacking, did everyone forget this happened? I'm sure the families of the Americans and Kuwaitis who died remember the dates very well but the rest of the country happens to remember only World Cup dates and when the next Mercedes comes out, even the invasion is slowly being wiped out from memories as well as the old houses.
Posted by Crazy in Kuwait