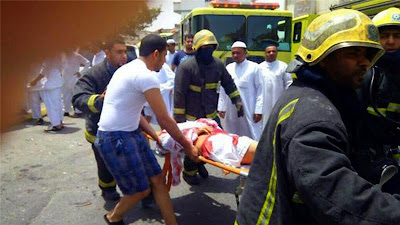 A suicide bomber has detonated his explosives at a Shia mosque in eastern Saudi Arabia during Friday prayers, killing at least seven people and wounding several others, witnesses said. One witness described a huge explosion at the Imam Ali Mosque in a village in the province of Qatif, where more than 150 people were praying.

An activist told the AFP news agency that at least four worshippers were killed, while a source told the Reuters news agency that there appeared to be at least 30 casualties in the attack. More recent estimates have placed the death toll higher. Pictures posted on social media purported to show the devastation, with dead bodies strewn across the floor and shattered glass covering the courtyard of the mosque.

That is hitting a little too close to home, Qatif is roughly three hours away from Kuwait.
Posted by Crazy in Kuwait