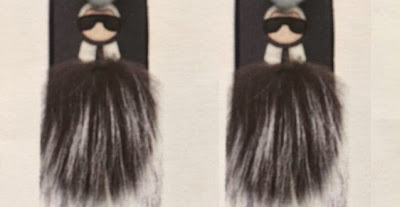 Forget gold-plated iPhone covers, Karl Lagerfeld’s Karlito is this season’s must-have phone accessory. If you haven’t met Karlito, it’s Fendi’s bag charm that looks like a mini Karl Lagerfeld. Last September, Karlito sold for AED6,189 ($1,685) a piece and had 600 people on its waiting list. And it’s now available as an iPhone case, costing around AED2,200.

Just like the original Lagerfeld charm, the cover is made of mink and goat fur.Though it’s only made for iPhone 6, Karlito will be offered in store in the United Arab Emirates this May.The cover first debuted in January during Fendi’s pre-fall presentation.Along with Lagerfeld’s white hair and crisp collar, the doll on the cover features the designer’s signature black sunglasses.

Two colours will be available for the cover: black and magenta.There will be only 65 pieces produced for the Middle East.Lagerfeld, who’s been designing fur ready-to-wear for Fendi since 1965, has been criticised by PETA and several designers and celebrities for his use of real fur.
Of the accusations, the designer said that he’s killing beasts who would kill us, humans, if they could, and that the discussion of fur is “childish.”