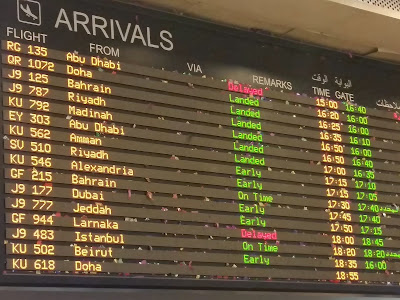 While other airports are speeding up their check-in processes and implementing more technology, the 87-year-old KIA is buckling under congestion.

The airport was extended in 2001 to accommodate 9 million passengers but additional expansion plans, originally due to be completed by the end of 2016, have barely broken ground after the initial contractor quit over delays.

The three-hour recommendation has announced on Saturday along with calls for passengers to cooperate with airport staff during the upcoming busy Ramadan and summer period, according to a statement carried by state media agency KUNA.
Posted by Crazy in Kuwait