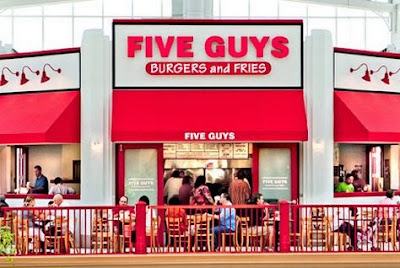 US-based restaurant chain Five Guys has announced that it will make its Middle East debut this month with an outlet opening in The Dubai Mall.

The restaurant brand, which specialises in halal burgers and hotdogs, grilled cheese sandwiches, veggie sandwiches, free toppings, fries, and the Five Guys customisable milkshake, will look to expand across the UAE, the retailer said in a statement.Five Guys is a family business started by Jerry and Janie Murrell and, as the name suggests, includes five sons Tyler, Ben, Chad, Matt and Jim.With its first opening nearly 30 years ago near Washington DC, Five Guys has since grown to be one of the most popular burger restaurants in the US and Canada with 1,200 locations, and is expanding into new markets overseas.

The first opening outside of North America was in 2013 in London and there are now over 20 UK locations.It said in the statement that it  is opening the Dubai outlet in partnership with regional franchiser Rise. Jerry Murrell said: “The arrival of Five Guys in the Middle East is a dream come true. We’re delighted to have the support of a regional partner whose interests, namely letting the food do the talking, are so closely aligned with ours.”

Tyrone Reid of Rise, said: “Our first store opening in The Dubai Mall represents the first step in our planned UAE rollout, and we’re looking forward to bringing the Five Guys experience to subsequent locations in Dubai and the UAE over the months ahead.”
Posted by Crazy in Kuwait