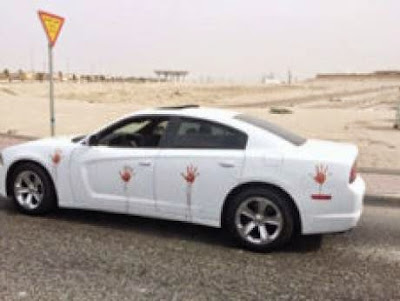 Police in Kuwait have impounded a new car after they spotted bloodstains on its sides, saying it had broken the law.

However, the owner has insisted that the stains were images of an open right hand meant to deflect the evil eye and protect the vehicle.The car came to the attention of the police when officers in Jahra, northeast of the capital Kuwait, noticed blood spots on its sides.

The police chased the car and asked its driver to pull aside, local daily Al Anba reported on Thursday.When asked about the significance and origin of the blood, the driver, a stateless Bidoon, said that he had bought the car one day earlier and that he slaughtered a sheep to celebrate the occasion.He dipped his right hand in the blood and printed it on the vehicle to keep the evil eye away from the car and from his family.

However, the police said that the bloodstains, regardless of their significance, were illegal and impounded the car, the daily said.The open right hand image, known as khamsa (five, in Arabic) , is popular as a lucky charm throughout the Middle East and North Africa.

Recognised and used as a sign of protection in many societies throughout history, the hamsa is superstitiously used as a talisman and it is believed to defend people in the house or in the vehicle from the evil eye and harm. It is also commonly used in jewellery and wall hangings.

Really? The bedoon guys can't catch a break can they? I've heard of people doing this before so it isn't a big deal. Imagine how hard the guy had to work to get the car considering the bedoon are not allowed to own anything in Kuwait. It was such a joy that he slaughtered a sheep, now that is a big deal as the practice is normally done when a child is born or very special occasions, sheep aren't cheap.

After all of that the police still impounded his car and we all know what happens to cars in the impound lot! Note to self: blood stains on cars is illegal
Posted by Crazy in Kuwait